This Sunday (27th October) sees the launch of David Attenborough's newest series on BBC1. It is entitled Seven worlds, One Planet and the pre-screening blurb promises us a feast of wonders with a focus on the "extra-ordinary diversity" that can be found across the seven continents that make up Planet Earth. 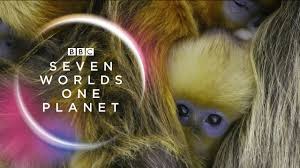 It will also inevitably, pressingly, show how that diversity is under greater threat than ever before.

The planet wide scope of the series is welcome for all sorts of reasons, not least that it cuts to the heart of one of the biggest problems we face when dealing with the climate emergency we are living through. It's just so big.

Humans have not evolved to think on an earth-wide scale. We think of home, family, work, friends, hobbies and food. We do not instinctively think of how each of our actions combines and intertwines with billions of other actions. On a daily basis we don't easily draw the line between our food choices and the deforestation of the Amazon. We don't naturally perceive the link between water shortages in Australia, China and central Africa. It's not easy to think that big.

And yet clearly we must.

When we focus on the immediate we miss the point. This is not a conversation about the weather on our doorstep. This is the story of rising polar temperatures, disruptions to weather patterns affecting harvests in Asia and /Africa. It is the water shortages appearing across the globe and wildfires spreading like, well, wildfires across North and South America and Russia. This is a picture so big is can boggle our brains.

At least we're reaching a point where the science is becoming settled. Well over 95% of climate related science is now in agreement about the changes happening to our world and the primary cause of it. That's safely in the realm of settled fact. Not that you'd always know it by the words of some, including the United States Denier-in-Chief.

By accepting the facts is one thing. Becoming slowly accustomed to the idea of the Anthropocene is all very well and good, but slow accumulation of disparate knowledge does not summon up righteous anger and passionate, impactful, quick, change. And if you can't see it in your day to day life, what does light that spark in people.

It's a challenge for media outlets old and new. The BBC has copped a lot of flak over the past decade or so for giving a platform to those who dispute the established facts on climate change. They don't do that now, but the long years of seeking balance by offering opposing views lingers on. Social media operates on soundbites, memes and tweets. None are suited to detailed analysis that pulls together the strands of change from around the globe into a meaningful story.

Attenborough's attempts to do this job will be vital. His is an increasingly lone, trusted, voice in the never ending noise of the modern news cycle. If his words cut through in the way they did on plastic use during Blue Planet II then we may reach a tipping point of awareness. The story of change is global, the story of humankind's thoughtless impact is planet wide. The answers will need to be just a large in scope.

We often speak to our customers about the importance of believing that the little changes do add up to something meaningful, that it is worth refilling one plastic bottle at time. And that is totally true. We have to keep faith that our individual and community wide actions can have an impact. But it's also true that such an argument contains a paradox at it's heart. Yes we must believe in the small changes that are within our power, but we must never lose sight of the big picture that drives the need for them.

Ultimately, as with so much in life, careful, painstaking education is the answer. To come up with effective solutions, we need as much information as possible as well as the ability to filter the trustworthy from the less so. Attenborough is vital in this, but it's not his job alone. It's up to all of us to understand, to gather information, to think on scale way beyond our doorsteps and neighbourhoods. 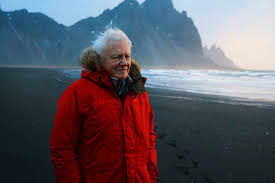 So, yes, it matters that we refill our bottles, tubs and jars. Yet we must do more. It might be distant to our day to day lives but the Amazon is being pillaged, the glaciers of Antarctica are melting, the rivers of Australia are running dry, the trees of Europe are under threat as warmer weather aids the spread of parasites, the Polar ice is disappearing as temperatures warm there four times faster than anywhere else... and on and on and on. The climate emergency and its threat to the diversity of life on our planet are global and overwhelming. Our responsibility is to look it square in the eye and arm ourselves with the knowledge to make a difference. The time has passed for blissful ignorance.

Can Attenborough do for diversity what he did for plastic? Maybe that is the wrong question. Maybe we should be asking; If he can't, who can? The clock, after all, is ticking...
Posted by 99.94 at 6:26 AM